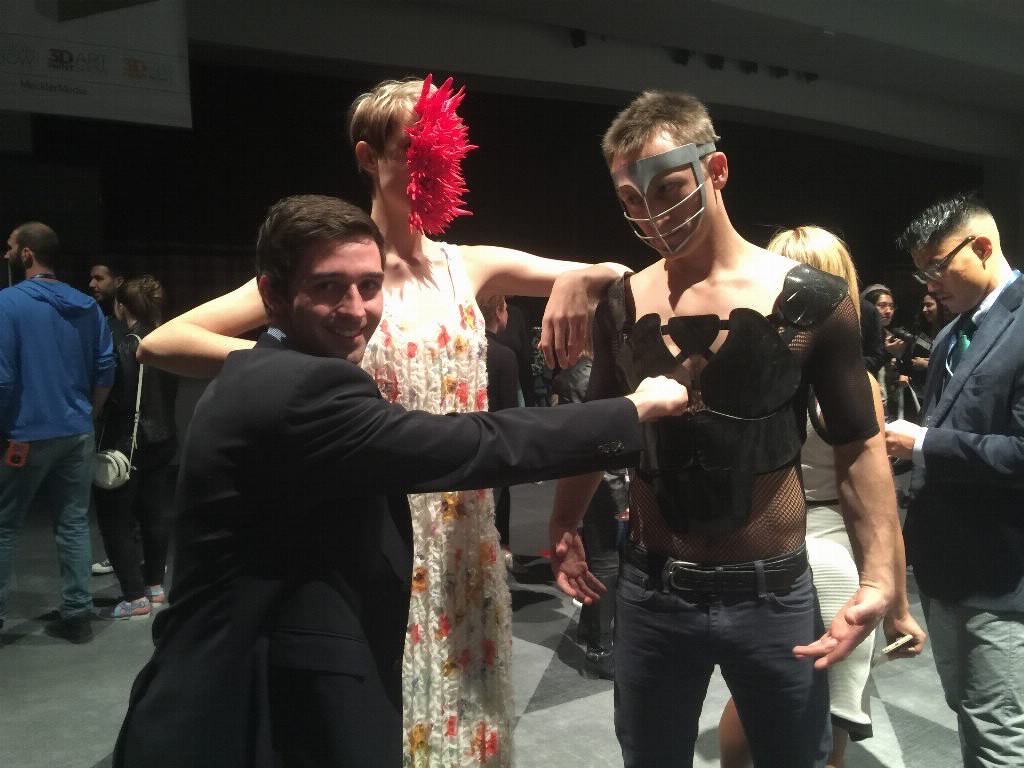 Inside 3D Printing NYC kicked off with a bang as J. Scott Schiller, Worldwide Director, Hewlett Packard 3D Printing, gave a rare public address on The Shapes of Things to Come. Besides detailing HP’s groundbreaking Multi-Jet Fusion technology, which promises to increase print speeds 10-25x compared to existing technology, he announced HP’s inclusion in the 3MF coalition, a new file format designed by leading software companies and manufacturers to replace the aging STL format. Scott hinted that HPs’ printer will hit the market at the end of 2016, a move that Terry Wohlers, President of Wohlers Associates, predicted would “rewrite the rules of 3D printing. I can envision companies purchasing expensive equipment and then putting it in moth balls when the new HP equipment becomes available.”

The 3D Print Fashion Show sponsored by Materialise mesmerized onlookers as top designers showcased new innovations in materials and design. The first 3D printed full-length gown designed by Melinda Looi drew accolades, who were dazzled by the dress printed in one piece with over 5,000 Swarovski then added by hand. Other designs highlighted the capacity for the technology to push new boundaries in performance, with stylish bullet-proof 3D printed body armor reinforced with Kevlar and new materials that may one day even be worn by astronauts showcased by Bradley Rothenberg.

Monad Studios’ now-famous 3D printed violin was on display for the first time at the 3D Print Design Show. Juilliard-trained musician David Heiss debuted a 3D printed cello and Scott Hall wowed audiences with a performance on a new type of guitar, the monobaribasitar. Major American news channels like Bloomberg TV and CNBC came to film the performances.

The third incarnation of the widely anticipated Startup Competition delivered the bleeding edge of innovation to an audience of VCs, angel investors and industry experts. To date, participants have raised more than $7 million dollars with past winners including 3D Hubs and Wiivv. Osiris BioMed 3D stood out for their innovative use of 3D printing in the operating room, where the technology has potential to save lives. The judges were unanimous in selecting Osiris BioMed 3D as the winner.

Near the end of Inside 3D Printing, I moderated a keynote panel on the Future of 3D Printing featuring industry heavyweights like 3D Systems, Fuel3D, Staples and Accenture. The panel explored killer applications for 3D printing like mass customization, the supply chain disruption enabled by distributed manufacturing, how 3D scanning lowers cost of 3D printing by lowering the barriers for designing parts and how desktop 3D printers will coexist with more capable additive manufacturing services. Sunny Webb of Accenture noted that much of the Fortune 100 is now talking about 3D printing and exploring how to incorporate the technology into their supply chain.

The week’s events cemented the theme for the industry in 2015: as the hype around 3D printing at home dies down, industrial applications will thrust into the limelight and impact people’s lives in an immediate way. The largest companies in the world are taking notice, with attendees ranging from Big Three Automotive and tire manufacturers to major consumer device companies and design professionals. 3D printing is more exciting than ever, with opportunities exploding.